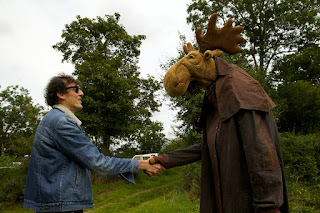 Cabaret, a movie full of emotions

Cabaret is a film about Music Hall, directed by Bob Fosse in 1972. This movie is adapted from the novel Goodbye to Berlin which was written in 1939 by Christopher Isherwood. In this American movie we can see the following actors : the great Liza Minelli, Michael York, Helmut Griem and Joel Grey.


This films tells the story of a woman, Sally, who is a singer in a cabaret called « Kit Kat Club» in Berlin. She meets a handsome man who wants to rent a room in her building, he's studying philosophy but gives English lessons to make a living. A curious friendship grows between them and they soon fall in love. They later meet a rich man called Max who makes all their desires come true. Brian also has a student, Fritz, who asks for advice to seduce a beautiful Jewish woman. This love story is there to give an opportunity to introduce the rise of the Nazi political movement.


This film is really interesting thanks to its direction, to the actors who excel at showing different feelings like enthousiasm, jealousy, hedonism. But the real magic of this movie comes from the musical scenes, and of course the well-known : « Willkommen, Bienvenue, Welcome ! ». The whole life of the characters is based on these songs. We were confused about one character, Emcee (Joel Grey) the ceremony master : he makes the spectator doubt with his moves and quotes that express opposite opinions during the film. Maybe one thing disappointed me : we can barely see the growth of Nazism, it is very subtle. I would have liked it to be clearly expressed in the movie. I won't tell the end of the movie, I had imagined another one. This movie got 8 Oscars in 1973 (for decor, sound, cut, and music) It also got the Golden Globe Award for the best musical movie.


I truly recommend this movie. It's not about the love for the cinema in the 70s, it's just a good moment of pleasure, laughter, and lots of emotions in one hour and a half !